About me, servant of the muse 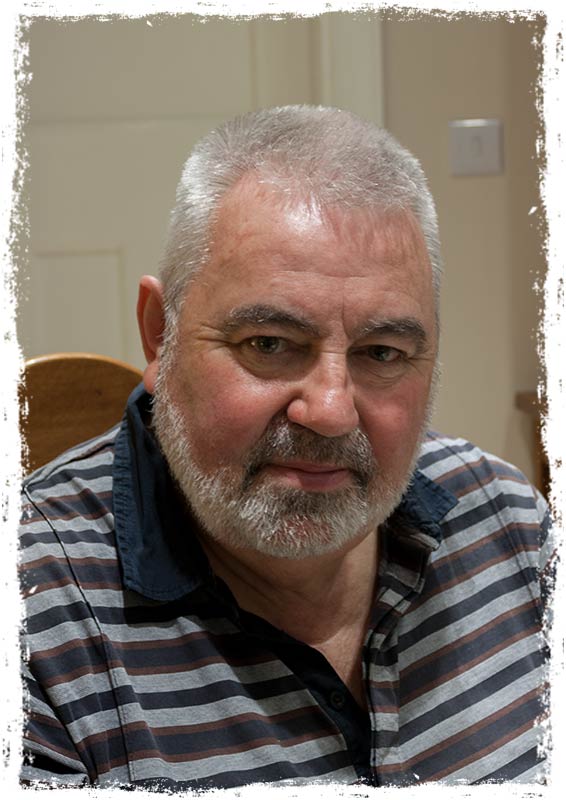 There you are! One picture is worth a thousand words.

No need to dwell here now you have my physog!

Perhaps if you read my epitaph, “Life After Death”, this may give you an idea of my mind-set, and an inkling of what my work is like.

My webmaster Dr Michael Mackenzie reveals the statistic that my most ‘visited’ piece is “Dermot the Pig” from the Children’s section, probably because it is the first on this list.

Please, as your first choice try something from the Adult/Humour section, maybe “Theresa”, one of my recent favourites. Another is “The Fox of Bannockburn” in the Children’s section.

Don’t feel you have to read what is below. It is about me, and is definitely boring.

I was born in 1947 and enjoyed nearly five years as an only child before my three brothers arrived to knock me from centre stage. I popped out in my Gran’s house in Carnwadric, a 1920/30s Glasgow Corporation housing scheme which still exists. I may have been the last of around one hundred children my Gran ‘welcomed’ in her role as an un-registered mid-wife, just before the NHS banned this practice.

In Britain generally, Post-War Housing was scarce and Glasgow was among many cities that suffered from such shortages. As a family we lived in a variety of ‘digs’ as sub-tenants. In about 1951 (aged 3 or 4) we moved to Pollokshaws, to a ‘single end’ with a shared outside WC. The nearby communal wash-house (the Steamie) and public baths were important. The Pollok Estate was where we spent most of our Summer Holidays.

In about 1955 (aged 8) we moved to a newly-built two-bedroom SSHA [1] house in Arden. For the first time we had a bathroom! There were no schools or shops at first, and all of us schoolkids travelled (unsupervised!) by tram and bus back to Pollokshaws to attend Sir John Stirling Maxwell’s primary school. The Rouken Glen Park and the Shady Brook [2] were where we spent our long summer holidays, (near to eight weeks for those of us who did not get ‘holidays of obligation’).

In Primary 4, 5 and 6, my teacher Mrs Shearer first sparked me into story writing. By that stage I was a voracious reader and my reading spilled back into my childish stories. Most days Mrs Shearer read to us, mainly Enid Blyton Famous Five stories. These late afternoon sessions were a reward dangled before us throughout each day, to encourage us to be ‘good’. Mrs Shearer was a wonderful story-reader. I close my eyes and can see and hear her still, a vigorous middle-class woman in her early fifties, dressed in a red overall to keep the chalk dust off her clothes, with her steely white hair in a severe bun, dramatizing her stories in her distinctive North of England (Cumberland) accent. She drove a two-tone Hillman Minx, the only teacher in our school who had a car.

After Mrs Shearer my fiction writing was put on hold until retirement.

Aged 15 I left Shawlands Academy with no qualifications, to become an apprentice at Alexander Stephen and Sons, Shipbuilders and Engineers. Further Education was pursued doggedly and I eventually became a mature student at Strathclyde University. Immediately on graduation (1975), I spent four years as a member of staff in the newly fledged Department of Environmental Engineering.

In the midst of this educational fervour Margaret and I got married (1972) and Stuart (1976) then Craig (1978) arrived. In 1979 I left Strathclyde to join Hulley & Kirkwood Consulting Engineers, became a Partner, then a Director when we incorporated.

Through this long period my life was filled with many competing imperatives: there was no thought then of writing. Looking back, this was a lost opportunity as I had many frustrating hours on planes, airports and hotels when I could have been scribbling first drafts.

In June 2001 (then 54) I launched myself into a form of partial early retirement. At first I tried many hobbies and myriad courses at the Centre for Lifelong Learning (CLL) at Strathclyde, where I still persist with Italian, and choral singing and other topics as they tempt me away from my laptop.

On that first retirement Christmas in 2001, Haley Crawford, our beautiful and talented Canadian relative, then aged 10 years, came to visit, with her family. She had recently won a fairly major story-writing prize, in the face of very stiff competition from 1500 other children, aged up to eighteen, as I recall. She let me read a copy of her story. It was amazing. Haley wanted to see a ‘real Scottish castle’ and with our dog Fleck we went for a walk to Mugdock Country Park where there are two such castles, both in ruins.

We saw molehills, hundreds of them.

At that time I had only a sketchy understanding of the lives and times of moles, but I did my best:

“Haley, why don’t you write a story called ‘The Moles of Mugdock’?”
“No, John, it’s your idea, you write the story!”

For the next few months, intermittently, her Dad (Charlie Crawford [3]) would send me a ‘reminder from Haley’ that I should be writing “The Moles of Mugdock”.

Well, I did write it, furiously in a very amateur untutored way, and like many stories do, it stalled due to lack of focus and a feeling that ‘it was not quite right’.

Being newly retired I was thralled by other past-times. Then gradually the urge to tell stories returned. I can’t remember exactly when it happened. It was probably in 2010 when it became my imperative to write. Now I write every spare minute of every day, driving my wife close to madness in the process.

The catalyst for this life change, (sounds dramatic, but not if you know me), was the series of Creative Writing classes offered at Strathclyde University. These classes continue at the Centre for Learning in Later Life, led by the wonderful and wise David Pettigrew. From this class came The Writers’ Circus, formed by a group of us who studied together under David. We continue to meet monthly, set challenges and give each other support and gentle, constructive criticism. Many of my current batch of stories come from these ‘challenges’.

And finally, why do I write?

Part of it is to leave a legacy of some sort for my family, particularly my grandchildren Matthew (2010), Ethan (2013) and Drew (2015). Perhaps in years to come when Grampa is long gone, they and maybe their parents and kind friends might find an echo of their own lives in what I write.

Anyway, nearly enough of me!

Thank you for reading my stories.

1. Scottish Special Housing Association. There were 8 families in our close with 22 school age children. [Back]
2. The Brock Burn [Back]
3. Check out domainepinnacle.com/en/ [Back]

Downloading to iPad and other devices

The stories on the Buzzin’ Bee are provided free of charge for you to enjoy. You may wish to download them to read on your iPad, e-reader or other tablet device. The process is straightforward and is described below.

Other devices will have their own methods for downloading PDF files. Please consult your user manual for more information.

Logging in using one of the above methods is recommended but not required. If you prefer, you can comment as a guest. To do so:

Using this method, you will still be required to provide your name and email address; however, only your name will be made visible to the public.

It can be lonely out here in the cyber-land, so do let me know if you like a particular piece, or even if you don’t. I will try to respond positively. Depending on what part of my little story-writing universe I might be in, my response may take some time! I do not ‘live in my email in-box’ nor do I Facebook (a recent verb in our lexicon), nor to I Tweet.

Feedback and comment can be given anonymously. I have no wish to ‘track’ you or to gather information for marketing or commercial gain of any kind. My reward would be that you gained some pleasure from reading my work.